It’s more than twenty miles. It’s thirty at least up a steep incline with switch-backs. I leave base camp early. I trek all day, stopping now and then to gather wild berries growing alongside the empty highway, to cool in the shade of a boulder or, once I gain altitude, beneath a pine.

And then, by evening, I am here. Sky Islands.

I catch glimpse of a quick movement in a clearing–a blur.

When I turn, I fill with hope. A chipmunk gnaws an acorn from a white oak.

The first mammal I’ve seen. OK, so it’s not a wolf, a coyote, a cougar, a grizzly. It gives me no indication of the fates of larger mammals: polar bears, whales.

But it’s a mammal. It’s a mammal, and it made it, and birds, people, and fish aren’t the only vertebrates.

I fall in love with its white belly and dark eyes.

I hear an eagle call and turn to see it soar above the lake.

Glaciers blanket the distant mountains–glaciers! Their slow crawl down the slopes brings me a twinge of sadness. Why does the sight of ice make me feel like crying? Blue. The blue of the lake is haunting. The words come to me: Blue ocean event, and I feel the sudden grief of it.

But if there are glaciers, it’s not lost, right? Ice still exists in this world, and maybe, the polar caps have been restored.

Or maybe they were never lost.

I wonder why I can’t look it up. What happened to technology? Why are there no computers here? No internet? No google?

How will I find out anything?

All I have are my eyes, my hands, my senses, my feet.

For I have my mind, too, and curiosity and wonder and I can pose questions and explore and investigate.

I spend the remaining hours of daylight investigating. And as night falls, I walk beneath the black pines, following the sound of water. 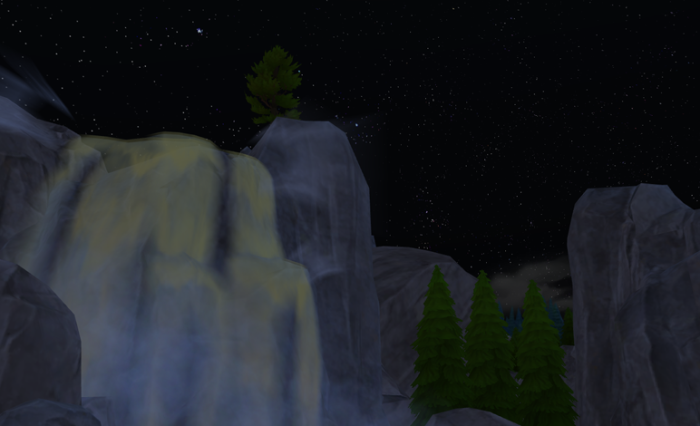 The moonlight casts blue moon-bows in the waterfall.

I used to think that I was a container for this “something greater.” But now I see that it can’t be contained: It just flows, through this form these forms this space this air these stars this water these blue moon-bows. It flows. My reverie shakes and wobbles and pops when I hear the crunch of footsteps on the pine needles.

“Hello,” I say, surprised that my voice still works. “I thought I was alone.”

I wonder if he will understand my language. For some reason, I feel that I must be a foreigner here. Or else he is. Or else neither of us belongs, for how could the world be vast enough to hold two such instances of insignificance?

But he understands me.

“Hello,” he says. And it is simple. I remember, in an instant, how all the social protocol goes, and I marvel that etiquette might prove more lasting than polar ice caps.

Or maybe not, for I can’t remember what to say next.

“I was just reflecting on… thinking of… noticing… The moon is bright, isn’t it?”

With a laugh, he agrees that it is, and then he says something about fish, and I say something about chipmunks, and we both smile that glaciers exist, and when I ask about the Blue Ocean Event, he says he has no idea, he’s been wondering, too, but maybe, if there are glaciers, there can be polar ice caps, too, and I want to ask, but I’m too afraid of the answer to, if he thinks there might be hope for polar bears, even still.

And he says he is, too. And with that, we become friends.

The next morning, I see bees, and my heart sings.

Then I sing aloud while I harvest wild basil, because my heart says, “With a song this loud, you must sing,” so at the top of my lungs, singing so loud that the chipmunk scampers, I sing:

And beetles and frogs
And dragonflies, too!

The flowers are bigger
And brighter, too!

I’d walk every glacier
Just to find you–

And before I can sing the next verse, someone screams.

It’s a park ranger, and she points to the ground before me where a crowd of giant termites are getting into formation.

“Now isn’t that something!” I say.

11 thoughts on “And Solitude”

This story is a work of SimLit: literature that is written in conjunction with the game The Sims. This particular story follows the adventures of a Murkland Starter Challenge, a challenge created by Brennachan.
Follow Through A Glass Murkly on WordPress.com

Office Tales: What I Miss Most

Choose Your Own Archetype: The Fool